Ah, Pi Day. Who doesn’t love it? On March 14 every year we all think about the world’s favourite irrational number. Ancient Egyptians and Babylonians used Pi in their mathematical calculations – today we celebrate it (and use it in our calculations, too). Not just for science and math geeks, Pi has become pop-culture phenomenon around the world. 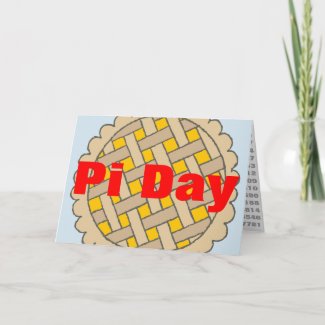 The record for reciting the most decimal places of Pi belongs to Rajveer Meena, of VIT University in Vellore, India. Get ready for it – he was blindfolded, and took 10 hours to recite 70,000 decimal places!! I can mange 5. Oh well. But those 5 places are useful, because 3.14159 gives you the exact day and time Pi Day occurs – May 14 at 1:59 pm. And I’ve been told that a scientist in Switzerland used a computer to calculate the decimal places of Pi to more than 22 trillion digits. Try reciting that!

Because Pi is an infinite number we’ll never determine every single digit. However, the number of decimal places calculated has grown exponentially since Pi’s first use. The Babylonians thought the fraction 3 1/8 was good enough, while the ancient Chinese and the writers of the Old Testament (Kings 7:23) seemed perfectly happy to use the integer 3. But by 1665, Sir Isaac Newton had calculated Pi to 16 decimal places. By 1719, French mathematician Thomas Fantet de Lagny had calculated 127 decimal places. 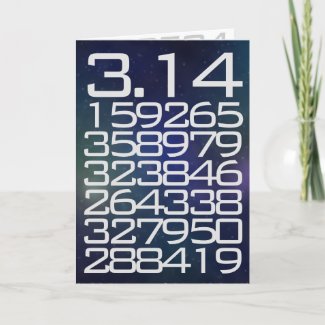 Let your inner geek show and have fun with Pi Day! Like sending cards? Find some more here.

Find Me On The Web